I have a strong dislike for how all social networks today mess up the ‘feed’ section in a way that is plainly user hostile, and detrimental to user experience. Facebook, Instagram, Reddit—they are all guilty of this. I know it helps drive engagement, serve more ads, and make more money in the short term, but time is a finite resource, and when you employ every trick in the book to waste your users’ time, the only possible result is that over time (heh) you start losing users.

Twitter was one space where things used to be better: Twitter was about who you followed, so the concept of ‘recommended posts’ was new to the platform. But the company started with a ‘someone you follow liked this’ recommendation system, and now, somewhat recently, although I’m not sure exactly when, has started making topic based recommendations by inserting posts into the main Twitter feed for all users.

I get why Twitter (as well as others) do this, but Twitter is in some ways a special broadcast and community collaboration platform. It goes far beyond being just a social media platform in that sense.

So when Twitter does this annoying thing of injecting stuff into my feed that I have not actively opted in for, it gets, well, annoying.

This has been bugging me for a while, but I recently sat down to think about why it bothers me so much, and I think it really comes down to how I use Twitter: I rely on Twitter for general global and political news, for local and hyperlocal news and coverage, for tech and startup news and discussions, and also for entertainment—the silly kind: memes, gifs, the viral stuff, and so on. HOWEVER: I don’t ever go to Twitter with all of these needs at the same time.

The reason I log into Twitter in the morning on a weekday is entirely different from the reason I get on Twitter during my lunch break, or while waiting in line somewhere. In the morning, I want to spend maybe ten minutes or so on Twitter to catch up on the news, and to check the latest stuff shared by the journalists, VCs, entrepreneurs, and analysts I follow. Basically, just a quick ten minutes to catch up on the latest and then get on with my day. When Twitter bombards me with the viral stuff at that time, it becomes a distraction. I waste more time than I intended to, and then I hesitate to come back to Twitter, fearing another time sink. This is a major reason the time I spend on Twitter has been going down, and I suspect that’s the case for a number of people too.

I have a super rough mock up how this interface should look: 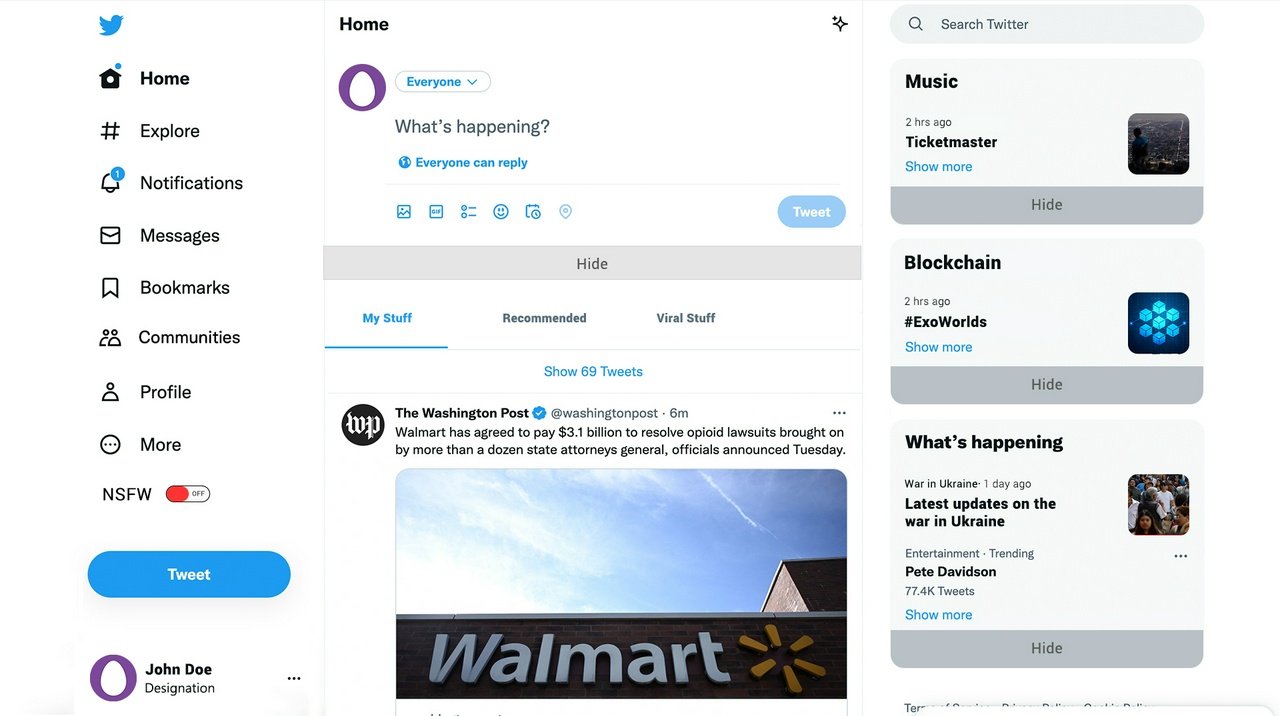 Let's take a quick tour of the new elements in here.

This already helps me clean up my feed a ton, and gives me better control over how I use Twitter in the course of a day. But a few more things would really make this worth that $8 a month.

Music/Blockchain/Topic of Interest: These are topics I am interested in. I might follow an artist or a brand, or an industry, and so on. I have a few specific hopes for this section:

A couple more things I’d like to see, in addition.

How would you filter this? Simple enough: When people try to post anything other then a text tweet, and upload any type of media—video, image, or gif—get get them to mark the content as either NSFW, NSFL, or Safe for All. Reddit has a simple site wide filter for NSFW content that works fine, so this isn’t too hard. There will always be people who deliberately or mistakenly mark their content wrong, but the basic community-driven content reporting feature, which already exists, should take care of this.

Would be all be worth a $8 monthly subscription? I think so. More than the blue check or other creator features, as a mostly passive content consuming user of Twitter, I’d find these features definitely worth paying for.